First of all, I must give some props to the King of Grief, who decided to turn Bottom Feeders into a radio broadcast for a few hours last Tuesday. You can check him out every Tuesday over at KPFT. Great set list, even if he did play Meco’s “Ewok Celebration.”

Secondly, it’s really bugging me that in Garry Sharpe-Young’s A-Z of ’80s Rock book there are hundreds of groups that never released an album in the ’80s. Seems that to get in this book all you had to be was the ass wiper for Pretty Boy Floyd for a week and that was enough to make you an ’80s artist, despite the fact that you only released one demo in 2003; I had to weed out the non-’80s to get to the stuff the book is really supposed to be about. On the same note, I also purchased A-Z of Doom & Gothic Metal and there was a little box in the corner of the front cover that said “CD of 14 power metal tracks included.” I love me some power metal, but I can’t possibly understand why I’d buy a book on doom metal and get a power-metal CD with it. How about 14 tracks of doom and goth? Do I have to buy the power-metal book to get the doom CD?

And finally, I can now say I have something in common with Jermaine Jackson: Back in 1996 I caught a foul ball at a Philadelphia Phillies game. On Sunday night, Jermaine Jackson caught a ball at a Los Angeles Dodgers game. I guess “Blanket” is going to get a new toy from Uncle Jermaine.

And now, get ready for a little Wango Tango. Wango Wango. Tango Tango. Hereâ€™s the second and final week of the letter N, as we check out more songs from the bottom three-fifths of the Billboard Hot 100 during the 1980s. 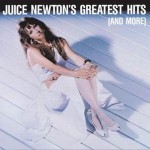 After talking about Anne Murray two weeks ago it was mentioned that I either liked blondes or MILFs growing up. We have three ladies in a row here to figure this out, because, frankly, Iâ€™m not sure myself.

I donâ€™t recall ever being hot for a sip of the Juice. One place she looked like a hippie and the next some 24-year-old vixen (like on her 1984 Greatest Hits album). I do recall, however, listening to a ton of her music. Or I guess I should say listening to a few songs quite often, because really, after she hit #7 in 1982 with â€œLoveâ€™s Been a Little Bit Hard on Me,â€ I couldnâ€™t remotely give you even one bar of any other song. But geez, â€œQueen of Heartsâ€ was a staple of many of my childhood days. Listening to it again right now, I kind of dig â€œCanâ€™t Wait All Nightâ€ though itâ€™s certainly different than her normal country-pop tunes — maybe too different, as it became her last hit on the Hot 100. She still had seven more Top 10 hits on the country charts, though, right through the end of the decade.

Now, Olivia, on the other hand — va-va-voom! How could a guy growing up in the â€˜80s not want to get â€œphysicalâ€ with her? Okay, maybe not after watching the video for that song, but for everything else, what a gorgeous woman. And she got better with age too!

No one reading this is going to agree with me on this one but sheâ€™s my favorite of the sandwich of ladies to start this post. I think she had a better voice than Juice Newton and Stevie Nicks (Iâ€™m going to get an argument with that one!). Iâ€™m not necessarily saying she made better music than Stevie Nicks, but I love the fun she brought to her music. Yeah, thereâ€™s a lot of fluff, but thatâ€™s not a bad thing. Iâ€™m very happy to bounce in my chair to â€œXanaduâ€ or â€œThe Rumourâ€ which of course is an Elton John/Bernie Taupin creation. Interestingly enough though, when I see the title â€œLandslideâ€ I can only think of Ms. Nicks and Fleetwood Macâ€™s classic tune from ’75.

No Stevie, no one has ever written anything for me. (Pouty lower lip, sad eyes, “drying tears” motion with hands …) Listening to this now is like listening to this for the very first time. I donâ€™t ever recall hearing this before.

And I never had any interest at all in Stevie Nicks. The gypsy persona never interested me. I can safely say dark and mysterious was not my number-one choice for women growing up; neither was wearing more clothes than necessary, which it seems is a trend for her.

There are many songs in the decade that I donâ€™t like, but very few that I wish to never hear again. This is one of those, however. Thereâ€™s just something about this song that I canâ€™t stand and if you know my tastes through reading this column, youâ€™ll understand upon listening to it. But I think it also stems from how difficult this was to locate. This cover of the Frankie Valli tune was only released as a single, though the 45 indicates itâ€™s from the â€œforthcoming LP Atomic CafÃ©.” So I spent a good two years looking for Atomic CafÃ© before realizing it was never released and then took another year trying to find a copy of the 45. Son of a bitch.

Another very difficult song to find. Night was formed by Chris Thompson and Stevie Vann of Manfred Mannâ€™s Earth Band. They released a self-titled debut in 1979 and then Long Distance in 1980 before breaking up. The album and 45 are tough to find, and it of course doesnâ€™t help much when youâ€™re typing the word â€œNightâ€ into a search engine. 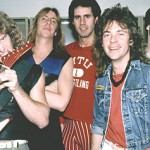 I know Night Ranger is a rock band, but thereâ€™s no chance Iâ€™d ever talk about them with other rock groups. Shame is that they had some rockinâ€™ tunes, like â€œ(You Can Still) Rock in America,â€ and their albums as a whole werenâ€™t too bad, but I think of them as more of a singles group. And of those singles, the only ones I remember are the ballads, of course, due to â€œSister Christianâ€ and sap like â€œSentimental Street.â€ And songs like â€œHearts Awayâ€ or â€œI Did It for Loveâ€ — I mean, has anyone actually listened to these in the last 20 years? In reality we owe Michael J. Fox for requesting they create what really is their best tune: â€œThe Secret of My Success.â€

9.9 were three high school friends that made music separately and together in the late â€˜70s and early â€˜80s before finally releasing their lone album (self-titled) in 1985 which yielded this pretty decent dance song and one more single called â€œI Like the Way You Dance.â€ The album includes one of my favorite bad song titles of all time: â€œ(Owch!) Hot Blood Pressure.â€

This song is the absolute true ass end of the Billboard Hot 100 charts.

We talked about 1927 just a few weeks ago, as it was formed by Bill and Garry Frost, the latter formerly of Moving Pictures. This of course owns the distinction of being the second and final song in this series to peak at #100. However, â€œThatâ€™s When I Think of Youâ€ wins the award for worst chart performance since Britny Foxâ€™s â€œLong Way to Loveâ€ spent an agonizing two weeks at the bottom spot. The real sad part is that itâ€™s a very good song and their only song to chart in the U.S.

I suppose this technically should have been back in D, as in 1981 these guys were just the Dirt Band (a pretty dumb change, if you ask me; I mean, â€œNitty Grittyâ€ kind of gives them a little flair). This was from their album Jealousy, the final record to be recorded under that moniker before going back to their proper name.

Maria Nocera was an Italian girl who came to America in 1986 to record music. I think Iâ€™ve mentioned this song in the past as being a trivia question made specifically for me. I used to play trivia at a bar every Wednesday night for many years and the game was to answer a sports trivia question in the amount of time a song played. You also had to name the song and the year it charted on the Billboard Hot 100. It was a four-quarter game and the questions got harder by quarter. The last question of the fourth was also a super rare â€˜80s song, as the DJ knew I was an â€˜80s freak and he would try to stump me. After years of going, songs started to repeat themselves and this one became a staple of that game, played dozens of times. Anyway, in a bar, from a distance, this doesnâ€™t sound too bad, but when you listen to this closely, damn if she ainâ€™t struggling like hell with her English.

Before hearing this for the first time I kept thinking this was some group named â€œNo-elâ€ probably thanks to the very Christmas sounding title of â€œSilent Morning.â€ But this is actually Latin freestyle artist Noel Pagan who released a self-titled record in 1987 and then a long lost unnecessary follow up in 1993. Iâ€™ve always enjoyed â€œSilent Morningâ€ a lot as it sounds more like an Information Society track than part of the Latin Freestyle movement. â€œLike a Childâ€ is shit.

Another hard to find song for the collection, this was Nolanâ€™s fourth and final charting hit. And in a feat that many of you will find amazing, I actually enjoy this song, though itâ€™s not my usual cup of tea.

Aldo Novaâ€™s first single, the #23 hit â€œFantasy,â€ is one of those songs you know but you have no idea who the artist is. This of course makes â€œFoolinâ€™ Yourselfâ€ even more unrecognizable, if thatâ€™s possible. In recent years Nova has written songs for cough*Celine Dion & Clay Aiken*cough.

â€œAlright, itâ€™s ze Wango ze Tango!â€ How could you not just love this fun blast of high-energy shredding? This was his final of seven charting singles, the only one to go Top 40 being â€œCat Scratch Feverâ€ 1n 1977.

Nu Shooz was always a favorite of mine. Neither of their Atlantic releases, 1986â€™s Poolside or 1988â€™s Told U So, are that great, but these guys put out some classic â€˜80s singles in â€œI Canâ€™t Waitâ€ and â€œPoint of No Return.â€ In my mind these guys will always be tied to Expose thanks to them also having a hit song called â€œPoint of No Return,â€ and to Sly Fox, who I seem to always remember being played back to back with Nu Shooz since their styles fit so well.

Not sure the Nylons were ever really needed on the airwaves and Iâ€™m no fan of this cover of the Turtlesâ€™ classic song. Just like Nu Shooz, these guys also have a partner in my brain, with Manhattan Transfer — though Iâ€™m not sure thatâ€™s a fair comparison.