Since the days that Stan Lee first wrote him back in the early 1960s, The Mighty Thor as always been a brash and boisterous character.  He was a thunder god after all and that’s actually the conceit of the character; his own lack of humility got him kicked out of Asgard by his own father.  His punishment was to be banished until he learned a little modesty.  But I guess it’s hard for a guy with huge muscles, a giant hammer, a flowing red cape and a helmet with wings on it to be humble and penitent over his own actions.  The whole crime and punishment scenario that Lee set up just never rang true as Thor was a hero who fought the bad guys, had the women swooning over him and even got to join the Avengers.  As punishment went, that was not a bad vacation for a bit of time away from home.  Of course, that was all in 1963 and the things that worked then may not work in 2011.

Anticipating the Thor movie coming out later this year, Marvel is trying to get out as many Thor books on the comic and book shelves right now as possible but there’s only one of them that you really need; Thor: The Mighty Avenger Volume 1.  While many of the other Thor books go after the superhero or mythological god angle on the character, Roger Langridge and Chris Samnee are taking slightly different path by telling the story of the lost boy kicked out of home.  They cast Thor in a more innocent light, setting him not to New York, Chicago or Los Angeles but to Bergen, Oklahoma and the heartland of America.  I almost expect to see an apple pie cooling on a windowsill in the background of one of Samnee’s pages.

Langridge takes the god of Thunder and makes him a stranger in a strange land.  Finding himself alone, powerless and without his memory, Thor only knows that an ancient urn in the Bergen War Memorial Museum is important to him.  Two people stand between him and the urn.  First is Hyde, a monstrous brute of a man and the other Jane Foster, a department head at the war museum who just wants to preserve her museum’s exhibits.  Having to battle each of them in their own distinct ways, Thor fights to find the urn and to find his memory.  Even after he’s found the urn, things aren’t easy for him.  It’s not enough to remember who he is but he needs to remember why he’s in Bergen, OK. and not in Asgard, and that’s something no one is going to tell him.

The beauty of Thor: The Mighty Avenger Volume 1 is seeing Langridge take Stan Lee’s basic story and retelling it.  Of course there is the super-heroic action as Thor fights the likes of Giant Man and Captain Britain in classic cases of super hero misunderstandings.  Those fights only serve to highlight how out of his element and lost Thor is.  Even in the brief introductions Langridge provides for those characters, they are heroes and Thor is just lost and doesn’t even understand who he is or who they are.  Langridge captures the innocence in this thunder god who’s been around for thousands of years.  He may be older than any of us but there’s a charming innocence and naivety to him as the bumbles around in the modern world, learning about things like clothes shopping, phones and even the occasional guy’s night out at the pub. 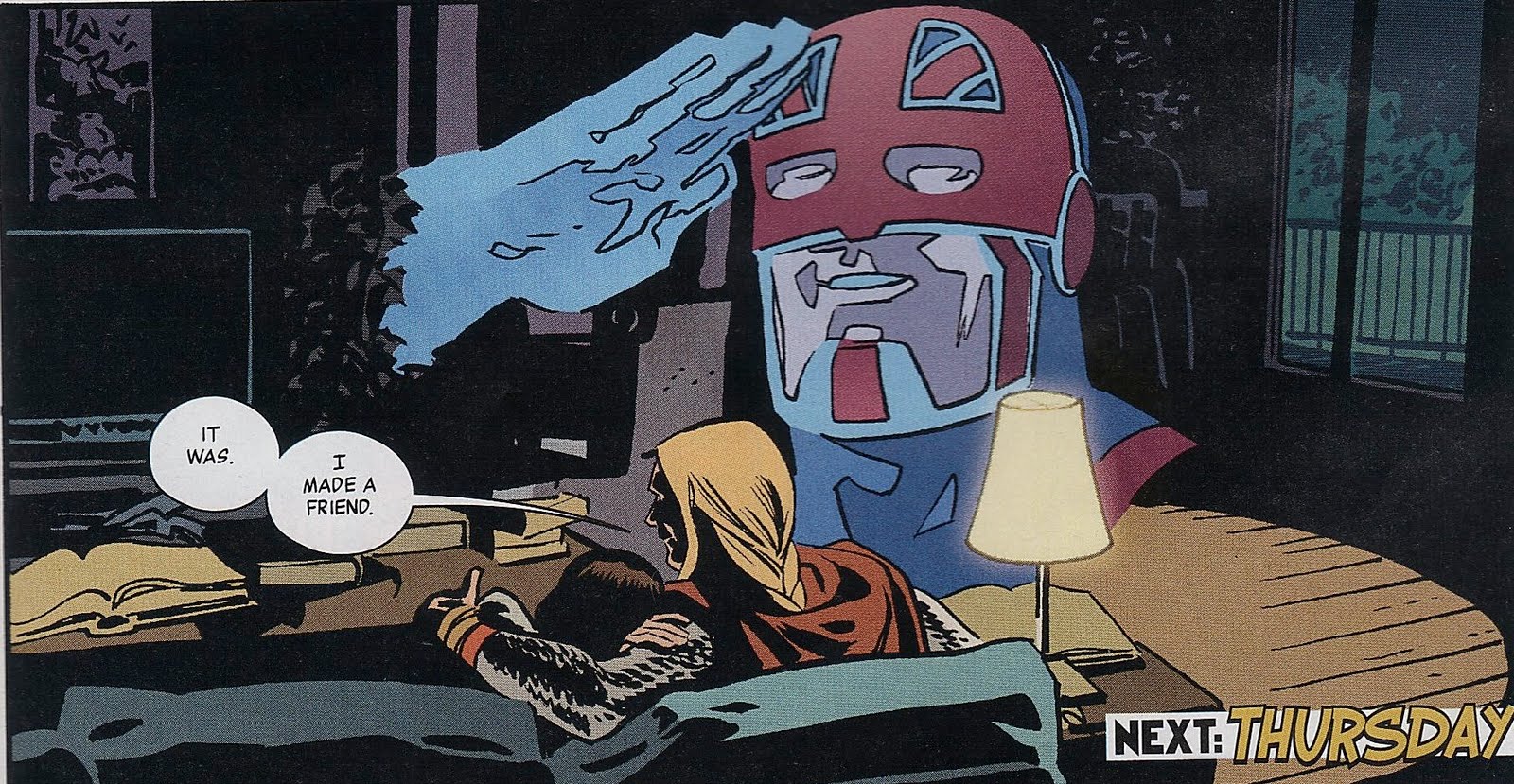 To keep Thor in line, Langridge has Jane Foster acting as Thor’s guide.  In Stan Lee’s Thor, Jane was a nurse and the perfect unrequited girlfriend for Thor.  In Langridge’s Thor, she’s a modern girl who offers to let Thor stay with her but just on her couch, of course.  She acts like the classic damsel-in-distress who doesn’t have enough confidence in herself but, as she shows, she has more than enough strength to keep up with Thor and the dangers now present in her life.  Of course the two of them fall in love, even if they can’t see that fact for themselves.  Langridge plays it naturally; there’s no long soliloquies from either character bemoaning the lack of love but, thanks to Samnee, you see it in their eyes whenever they look at each other.  Thor may be the main character of this book but Jane Foster provides the romantic heart of it.

If Langridge is providing the unique story for Thor, Samnee is equally up to the task of providing a unique visual take on the character.  Too often the post-Kirby artists have taken the basic design and made Thor into some overly stimulated muscle-bound freak.  Samnee captures the softer side of Thor, losing none of the power of the character but giving him a better range of emotions than he’s ever had before.  The light that dances in his eyes when he’s happy or the perturbed look he has when he doesn’t fully understand some aspect of life in 21st century Oklahoma provides Thor: The Mighty Avenger Volume 1 its emotional core that’s usually absent in books about mythological gods.

Samnee’s art is a delight just to look at.  Influenced by Alex Toth as much as Jack Kirby, Samnee brings a simplicity of design with him, telling the story as simply and effectively as he can.  When the story allows it, his artwork becomes just a few quick lines, dots to show eyes and a quarter circle for a smile.  It’s not a shortcut but it’s the most efficient way to show the emotions of his characters.  Samnee knows that it is not the detail that he shows in a panel but how he shows it.  Whether it’s the confusion Thor has, lost and alone in Oklahoma or the joy he has by being briefly reunited with friends from Asgard, Samnee reduces his character’s facial expressions down to just what’s needed to convey a wonderful emotion.

If there is a problem with this book, it is the initial pacing.  Langridge takes a bit of time in the first two stories to get to the point, dragging out the Hyde story over two chapters instead of the one that would have been a better fit for it.  There’s a strange tension between trying to tell a story about the hero Thor and the lost Thor.  By the third chapter, featuring a team up with Giant Man and the Wasp, Langridge finds the sweet spot in his story, deftly moving back and forth between the two aspects of his Thor.  The other oddity of this collection is the inclusion of the first two Thor stories from 1963’s Journey Into Mystery #83 and #84.  These two stories actually read better than I expected, providing a nice comparison between the Lee/Kirby storytelling and the storytelling of Langridge and Samnee.

It’s hard to believe that Marvel’s Thor is almost 50 years old and yet Roger Langridge and Chris Samnee can make the character feel so new and innocent.  While so many past Thor stories have been caught up in super-hero rigmarole or mythological retellings, Langridge and Samnee concentrate on the heart of the character, the son kicked out of his home by an angry father.  Lost and confused, this isn’t the story about an Asgardian god but about a man trying to figure out who he is. 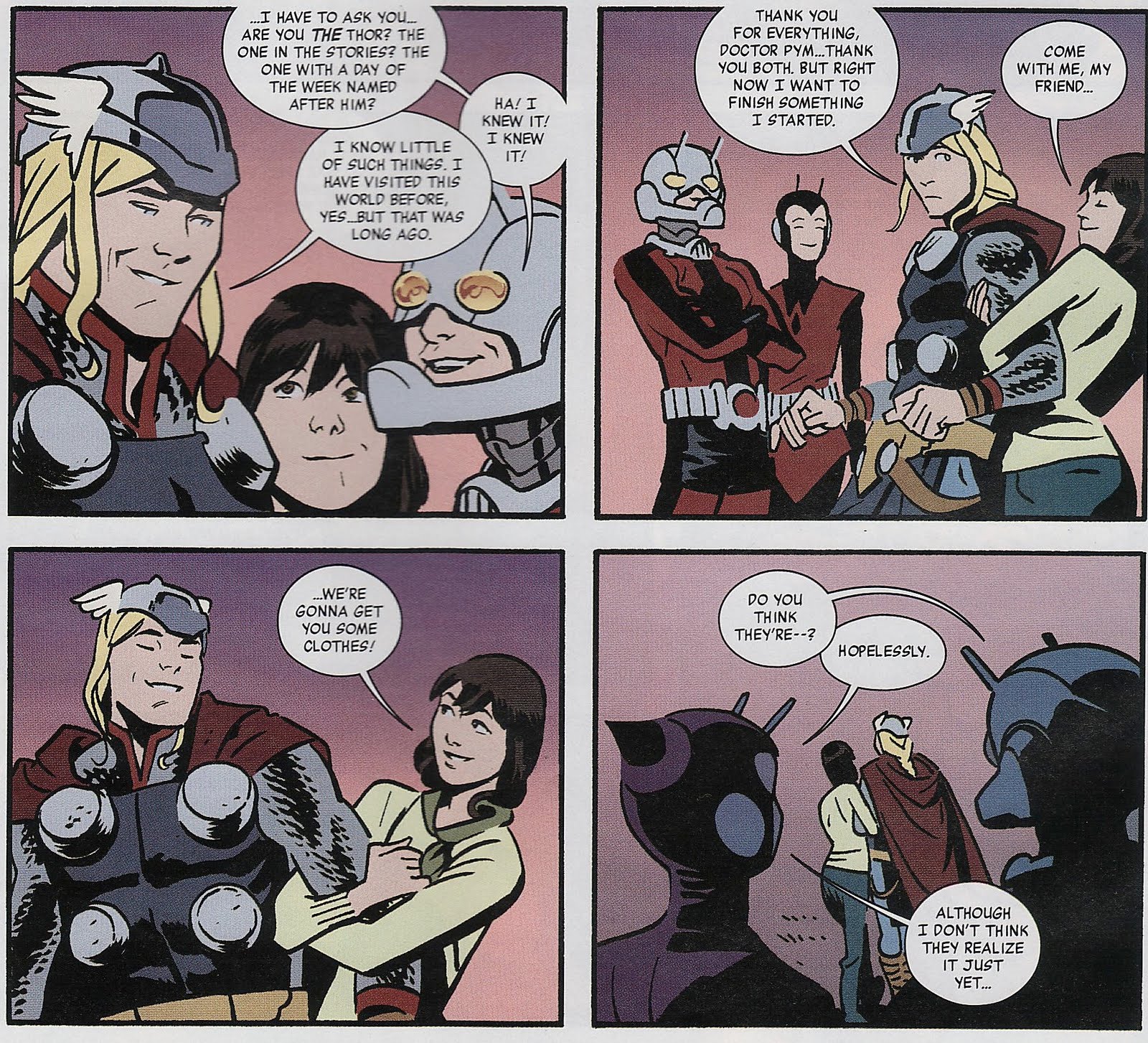