Confessions of a Comics Shop Junkie, No. 1: “The Unwritten,” “Joe the Barbarian,” and More

In which I take a look at a few comics of recent vintage, some of which may even still be on sale in a comics shop or book store (or name your online venue of choice) near you!

Hello Popdose readers! Introductions first: for reasons that are kinda involved in the explaining I’m known around the ‘net as Johnny Bacardi, and I’ve been reading comics for more than a couple of decades, as well as have been reviewing them in a number of places on the Internet since 2002- most notably my own blog, the Johnny Bacardi Show. The fine folks at Popdose have asked me if I’d like to write comics reviews and such for them, and of course I am honored and delighted to be able to do so. So what you’re about to read is the first of what I hope will be a long series of review columns, in which I intend to take a long look at titles that I deem noteworthy, and perhaps some shorter takes on a few others. I want to keep it fairly current, so I probably won’t be going back too far. To be honest, I don’t know what shape this will assume before we’re done, but whatever happens, I hope to put something out for you that’s readable, informative, and maybe even fun. Shall we? 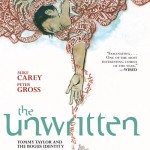 For six years, Carey and Gross collaborated on another ongoing series for DC/Vertigo, based on the Lucifer character created by Neil Gaiman in his Sandman series. It was an imaginative, dramatic, clever and often epic series that rarely disappointed. Both creators moved on to other projects, some more high-profile than others, but this is the first time they’ve worked together since they wrapped that series. Carey was inspired by the story of E.E. Milne’s son Christopher, who was of course the model for Christopher Robin of Winnie-the-Pooh fame, and how the son did not particularly appreciate the association by the public at large…and that’s where we meet twentysomething Tom Taylor, whose father wrote a series of Harry Potter-style juvenile fiction stories with the principal protagonist bearing the name of his son, and since the mysterious disappearance of said father has tried to make a living on his own ever since doing a number of things- but unfortunately the only thing people want to know him for is as the boy wizard all grown up. Things come to a head when, during a Q and A session at some convention, he’s confronted with the information that his parentage may be a sham, which causes public opinion to turn against him…until he starts encountering characters from the Tommy Taylor books, apparently real, one of which kidnaps him and sets out to kill him with a nail bomb with full Internet video coverage. Without giving away too much, I’ll just say that things get a whole lot more complicated after that, as Tom goes in search of his identity and is confronted with a supernatural conspiracy of yet-to-be-determined goals, who have been apparently keeping tabs on him all his life. Carey is spinning a lot of plates here- social satire, most notably of the fan mentality; horror-author satire, coming-of-age story, plain old horror-movie action, historical fiction (we get a whole issues’ worth of Mark Twain, Rudyard Kipling, and Oscar Wilde, and their encounters with the overarching conspiracy), the ever-popular good old nature-of-reality-vs.-unreality…you name it, and chances are Carey touches on it at some point in this collection of the first six issues. Frankly, you can see the antecedents of all this- Potter, of course; I’m also reminded of Rusty Venture of Venture Bros. fame…wonder if Daniel Radcliffe has seen this? If so, someone give him a copy- it could be his next tentpole franchise starring role! Oh well, I digress. We see elements of other Vertigo series such as long-running The Books of Magic, Sandman, Air, even Lucifer itself, with their accounts of ordinary (or so they think) people thrust into extraordinary events, with eventual revelations about the nature of their reality as they know it. Fortunately, Carey is skilled enough to take all these diverse elements and mix them in just the right order, and this series is off to a very good start, with many questions still to be answered. Tom himself is still a bit of a cypher; we know he’s frustrated and unhappy with life, but we don’t really see any other sides of him yet. Still, he’s not unlikeable, and that’s very important if you want your reader to care about what happens to him. Gross, for his part, is a reliable pro who’s done nothing but improve since his early years; his style is not flashy and I’ve never warmed to the way he draws people, but he steadily became more interesting and innovative in his storytelling choices as Lucifer continued and that remains the case four years later. I should also mention the wonderful covers by ﻿Yuko Shimizu, they’re all quite imaginative and cleverly realized. The Unwritten is a bit of a hodgepodge, but it’s a skillfully prepared hodgepodge that I think you might find interesting.

Morrison, one of the most imaginative comics scripters of the last 20+ years, has been occupied with playing with DC’s toys for quite some time now, most notably via his stints on the so-so and hopelessly muddled Seven Soldiers and Final Crisis megaseriesevents, as well as the inconsistent but often brilliant All-Star Superman and the less stellar Batman and Robin…and anticipation is high for this. Personally, I think he’s been spreading himself too thin for several years now, only intermittently hitting high notes with works like WE3 and most typically floundering around (heh- pun) with middling and needlessly convoluted stuff like his inexplicably popular Seaguy miniseries. Murphy is a talented up-and-comer whom I recall from his Oni-published 2006 GN Off Road; he’s done some DC work since on some lower-tier projects that flew under my radar. I liked Off Road pretty well, but haven’t really followed his work since- that will probably change, because Joe is Murphy’s show all the way- Morrison’s minimal script, which presents us with a somewhat detached, sullen, withdrawn young fellow who discovers that he can travel to a reality where all his cool geek stuff is real, concerns itself with introduction and stage-setting only, provides ample opportunity for Murphy to do a little cinematic storytelling- and his widescreen, insanely detailed depictions of the teenage protagonist’s house, drive to and from school and neighborhood are sensational, evoke mood and verisimilitude in spades. Kinda hard to judge after one issue, but this one shows promise, if nothing else but to provide Murphy a stage on which to shine. I can say this (and I won’t be the first or last to do so)- you certainly get your money’s worth out of this loss leader-priced issue.

Last year’s Scott Allie-scripted Dark Horse miniseries featuring Robert E. Howard’s venerable righteous asskicking Puritan was very good, despite some inconsistent art that at least had the benefit of typically masterful coloring by Dave Stewart. This new one, by the same creative team (but with a different colorist, darn it), picks right up in the same fashion and takes place not long after the events of the first mini and also has some of the same problems. Another tale of Kane coming upon bad gypsy-threatening humans and even badder demons in an exotic locale, Hellboy editor-turned scripter Allie is able to find exactly the right tone to use with Kane, all dour and detached, coming to life only when faced with horrible abominations both human and demonic. Artist Guevara, on the other hand, gives us a inconsistently drawn (his chin sometimes changes size from page to page), often overmuscular Solomon and his entire approach to physiology seems to begin and end with the early Image school of Jim Lee fame. That said, he did seem to grow into the proceedings last time out, and does pretty well with this issue’s deep dark Black Forest here as well as giving us some dynamic action set pieces. He’s not without talent, just not necessarily right for this material. Both creators stumble during the first action scene; Guevara doesn’t do enough to differentiate between the human-shaped demons in the woods and the nominal hero of the part, and when nominal hero bursts in to the middle of the melee, it’s more of a “what the huh?” moment than a “Fuck yeah!”. Still, Allie’s deft handling of the character makes this series well worth checking out, and will certainly provide good counterbalance to the upcoming Solomon Kane motion picture, which looks to be a train wreck of Van Helsing proportions.

When it comes to the Hernandez Brothers, I’ve usually been in the Jaime camp; since I tend to be visually oriented first and foremost, I am naturally attracted more to his clean, elegant line, superior blackspotting skills, and gorgeously drawn ladies (and guys, in many cases!). His brother Gilbert, on the other hand, has always been problematic for me. I freely acknowledge the man’s skills and talent, but something about his storytelling has always struck me as disjointed and needlessly random, and he has nowhere near the command of the ink brush that his brother has. I am definitely in the minority there, though; most comics critics and fans make little, if any distinction between them. The premise of this GN is intriguing enough; he has established some time ago in Love & Rockets that his well-endowed, lisping Fritz character starred in some low-budget movies, and has lately been giving us booklength adaptations of these films. This one’s a QT-like 70’s drive-in action thriller homage, with a group of four characters all scheming, scamming, and double-crossing each other to steal two hundred grand. It seems like it ought to be tons of fun, and up to a point it is, but about 3/4 of the way through I grew weary of not knowing who was aligned with who and what motivated this character or that, and I was happy to reach the end of it. For Beto fans, I think there will be much to like. For the tiny minority that is unable to tune in his frequency like me, not so much. (A PDF was provided by the publisher for this review)

More next week, thanks for reading!