Coincidentally, January 2017 also saw a spike in the sales of many classic dystopian novels. 1984 is the best-selling book of the year and has been referenced countless times in the news.  I’m sure a few of you can guess why.

But I think that this newfound interest in dystopian fiction will have a tremendous effect on Hurt’s legacy. It’s impossible to fully examine Hurt’s filmography; he has 204 IMDB credits to his name. But Hurt’s dystopian works show his range. Hurt has played everything from the everyman caught in situations beyond his control – both by the government and by corporations. He’s been the tyrannical leader of a frightening new world. And he’s played the hero who can avert disaster.

I’ll be looking at each of these dystopian archetypes and how Hurt played them.

The everyman was the former default protagonist of any dystopian work. They were not superheroes or even rebels. They were people who were trying to live life as best they could. By the end of the work, they’re usually broken shells.

Hurt looked like the quintessential everyman in his films, and it’s what he built his career on. He was not conventionally handsome, but had a presence that could not be ignored. And even when he was confident, you could tell that there was sadness and fear locked inside of his character. It’s why, even when he was playing a blue collar nobody, he was the most memorable thing in the film.

Alien showcases this aspect of Hurt’s talent. His character Kane the first one to die (in one of cinema’s most famous death scenes) and barely interacts with the crew. Kane never finds out about how his shipmates were deliberately sent to the planet to recover the alien – and whether or not they lived was irrelevant.

And he blends right into the revolutionary sci-fi aesthetic that Alien created. The characters are not Star Trek clones. They’re workers that squabble over money. So long as we have characters we can relate to, we’ll respond not only to the horrifying dangers but to the themes of the work. Most people occasionally feel their bosses view them as expendable. It’s horrifying to think what that means when it’s carried to its logical conclusion. And that only works because of actors like Hurt looking like our coworkers.

But the most notable item in Hurt’s dystopian filmography is Michael Radford’s adaptation of 1984. Hurt plays Winston Smith, Orwell’s middle class every man who cannot cope with his own dissatisfaction with his life.

The novel remains so effective because of the nightmarish world that Smith lives in. He goes through his day censoring the past, with quiet doubts about how horrifying everything is. It works well because we see Smith’s inner turmoil.

Hurt is, by far, the best thing about 1984. It’s such perfect casting that I almost cannot imagine Winston Smith looking and acting like anything else. But Hurt also captures the spirit of Smith in his performance. There is no chance that his rebellion will succeed, and Hurt’s Smith looks tired and worn out. He knows what awaits him. But at times, you can almost see the spark left in Hurt’s eyes that drives him.

It’s the part that Hurt was born to play and he played it well.

THE SAVIOR (As seen in Watership Down, The Day of the Doctor)

John Hurt as the War Doctor

Modern dystopias aren’t interested in the “every man.” Usually, those works didn’t end with the evil government being overthrown or even punished. The protagonist was usually defeated, or at best was isolated with a group of people who may be able to start over.

But look at The Hunger Games. That film did not really examine the “Capitol” or what this future government really supported. Its story is far more simple. The government is evil and it’s up to the downtrodden to rise up and overthrow the tyrannical government. More specifically, it’s up to a “chosen one” to unite the people and bring the new guard.

But this archetype wasn’t invented by Katniss Everdeen, no matter how much her fans claim otherwise. John Hurt took on the role of the chosen one in one of his earliest films and one of his last. The first was Watership Down, a film that creates an elaborate religious mythology to explain why the lowest caste is downtrodden.  A group is banished from their home and, in their quest to relocate, end up terrorized by a brutal dictator.

Did I mention all the characters are rabbits?

I’ve always been a fan of animated films that don’t follow the Disney formula. Watership Down is one of the most famous examples of an animated film that has a cute demeanor but a very dark premise.

Hurt’s Hazel is the protagonist of the story, even though he is far from the strongest character. At first, it appears like Hazel’s younger brother Fiver will be the one who will lead his people. Hurt never comes across as a statesman, but he is shown to be resourceful and caring. And, in the end, that’s enough for him.

The other time Hurt took on the role of the chosen one is when he played one of the most famous English characters ever – the Doctor.

The Day of the Doctor, which celebrated the 50th anniversary of the Doctor Who franchise, focused on the “Time War” that had been alluded to since the show’s return. It was what had not only nearly destroyed the universe but ruined The Doctor’s home world. His people are dirty and downtrodden and the leaders on his home planet have morphed into despots. Hurt’s Doctor feels the only way to save the world is to destroy it. It’s a decision that his future selves (David Tennant and Matt Smith) are haunted by.  At the climax, the other two Doctors join Hurt in deciding whether they will destroy his home planet Gallifrey or save it.

Hurt’s performance as The War Doctor is strange – in a good way. He’s younger than the other Doctors and comes across as naïve. Despite his weathered appearance, the War Doctor is as shocked by the battle as a teenage boy in the trenches.  He’s almost disappointed with his older selves for the childish way they act.

In the end, Gallifrey is saved by the Doctor, who rejects the notion that he must cause destruction. It leads to a satisfying conclusion in which we see every version of the Doctor working to undo their mistake. And it was good that, for such a momentous occasion, John Hurt was along for the ride.

What these “chosen” characters give audiences is hope. Novels like Brave New World and 1984 end on a down note that sees their protagonists beaten. Watership Down suggested that every character will overcome adversity and The Day of the Doctor retconned an important part of the Doctor’s story to give him a happy ending.

THE DICTATOR (As seen in V for Vendetta) 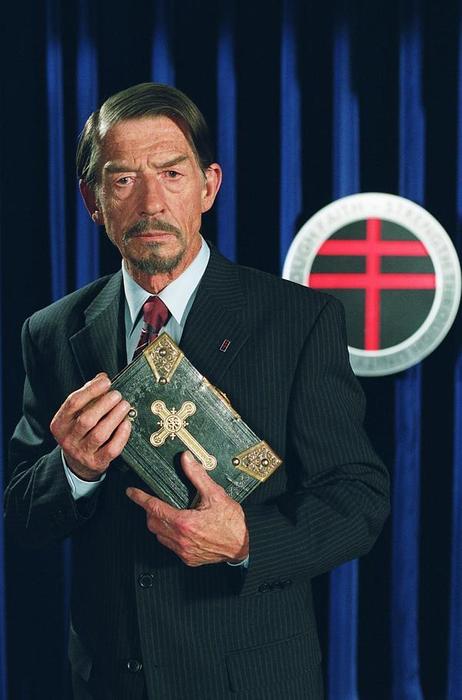 The dictator is the most important part of any dystopian world. They have to be mad but, at the same time, believable. It makes for a scarier world. Think about O’Brien’s speech in 1984. He was calm and collected as he explained how Ingsoc would never die. And his arguments made perfect sense. Not only was there no hope for Winston Smith, there doesn’t seem to be any hope for the future because Ingsoc has every conceivable resistance defeated.

Most modern dystopias ignore that aspect. The evil organizations exist only for the heroes to have something to rebel against. Their villains are cartoon characters who could not possibly ascend to higher office in real life.

For example, one of the most popular modern dystopian movies is V for Vendetta. Protest groups have adopted the Guy Fawkes mask. But the film isn’t nearly as effective as its reputation would suggest.

Ironically, the original comic avoided the mistakes that the film makes. Chancellor Adam Susan and the titular “V” were given an opportunity to explain their world views. Both are on the extreme sides of the political spectrum, but it’s easy to understand how Susan felt that fascism was the only appropriate course for his country. And it was easy to see how V felt that society had failed him and why he felt that the exact opposite political philosophy was the future.

The film doesn’t have that nuance.  John Hurt’s Chancellor Adam Sutler just exists to yell on giant screens. There is a hint of something much deeper that lead to his political party Norsefire taking control of England. (Sutler’s constant declaration that “England prevails” begs the question, “What is it prevailing from?”) But the film never answers that question and it doesn’t explain why the citizens in this world tolerate their oppression.

Still, Hurt does an amazing job playing a comic book villain. He appropriately chews on the scenery and (along with Hugo Weaving) is the only actor having fun with the material. Actors like that are a treasure. It’s a shame the script couldn’t keep up with Hurt’s talent.

So why is the film still celebrated despite its flaws? The dictator character is evil enough and the world, with its surveillance and media censorship, feels familiar. So long as the Dictator seems enough like the actual people in government, audiences will respond.