A mixtape so nice, we ran it twice. Listen back to Zack Dennis’ Ultimate Drinking Mixtape from 2009 and be jiggered! 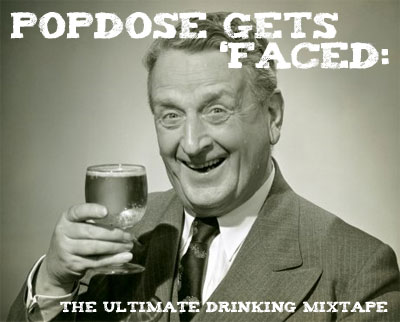 Today we celebrate the wearin’ ‘o the green, and for some of the heartier souls out there, the drinkin’ t’il you’re green. In the spirit of the day, and the damage that might eventually result from it, we’re pleased to present, once again, Zack Dennis’ Ultimate Drinking Mixtape from 2009.

A couple months ago, Jeff mentioned to me that he was thinking of putting together the Ultimate Drinking Mixtape in time for St. Patrick’s Day. I got so excited that I persuaded him to immediately open the floor to suggestions from the Popdose writers. And the song requests flowed in.

As the resident souse of the Popdose staff, I felt it was my responsibility to filter through the ideas that emerged and weave them together into something slightly more coherent than the drunken rantings I’d occasionally find typed out on my computer during the extensive beta-testing process. Later, during gamma-testing, the songs started to find their ways into groups. Finally, when I reached the delta-testing phase, things had been organized into chapters that celebrate the many different aspects of that delightful elixir that can lift or lower our spirits, make us in turn beautiful or ugly, and loosen or tangle our tongues with equal abandon.

Here’s the full tape – 116 minutes of pure malt goodness, with some wonderful words of wisdom sprinkled in.  Just add liquor.

The Popdose Ultimate Drinking Mixtape (Volume One, circa 2009)

Chapter 2…and then move on to why your life is so miserable.
Peter’s Complaint
Social Distortion – “Ball and Chain”
The Hold Steady – “Lord, I’m Discouraged”
Flogging Molly – “Worst Day Since Yesterday”

Chapter 3: Perhaps a visit to your local pub will cheer you up.
Norm’s Lament
The Replacements – “Here Comes a Regular”
Dropkick Murphys – “Barroom Heroes”
The Pogues – “Sally MacLennane”

Chapter 5…and then some bourbon…
Lionel’s Struggle
Tom Waits – “Jockey Full of Bourbon”
George Thorogood – “One Bourbon, One Scotch, and One Beer”

Chapter 7: Suddenly, you feel good enough to set up the house…
Bluto’s Offer
The Pogues – “A Man You Don’t Meet Every Day”
AC/DC – “Have a Drink on Me”

Chapter 8…and then just as suddenly feel unappreciated, and instigate some fisticuffs…
Leela’s Intercession
Nazareth – “Hair of the Dog”
The Rolling Stones – “Street Fighting Man”