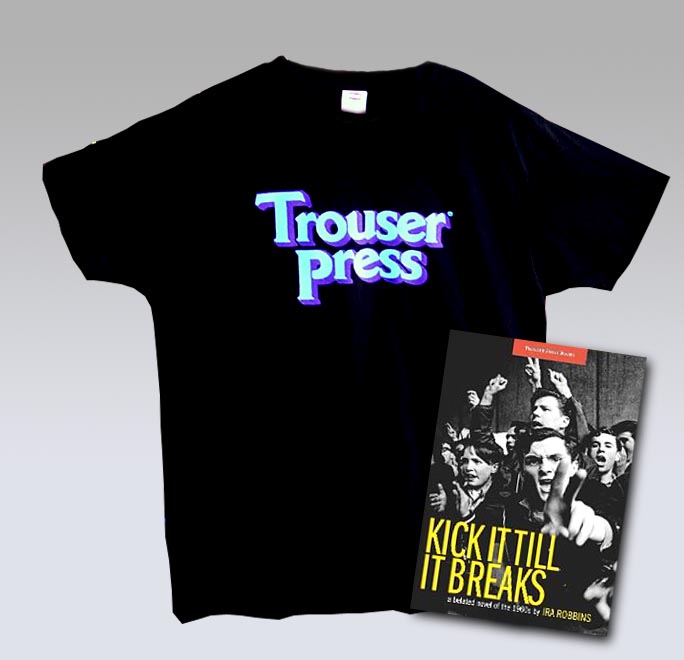 When I was a kid, there was no Internet, which made getting my hands on great music almost impossible. From my small town in Michigan, Top 40 and AOR radio was all we had.

Needless to say, I was bored off my ass in that town and so one day, with time to kill, I strolled into the local drug store to browse the magazine racks. There, I knew I would find the latest issues of 16, Teen Beat (ugh), and semi-cool rock rags like Hit Parader, Creem, and Circus.

On this day, though, seemingly out-of-nowhere, a magazine I had never seen before caught my eye. It carried a pic of my new favorite band, the Police, on its cover. My buddy Jim, also a big Police fan, saw the magazine at the exact same time that I did and we both made a mad grab for it, but on this day, my reflexes were just a hair faster.

And so it was that I walked to the front counter of the store, handed a couple bucks to the cashier, took my change, and left Rexall’s with my very first copy of Trouser Press magazine.

My life quite literally changed that night as I became absolutely engrossed in this parallel musical universe that existed within its pages. I’d long given up on most magazines’ coverage of my favorite bands, as the articles proved to be little more than gushing mash notes. The Trouser Press article on the Police, by contrast, was incredibly insightful and interesting. There was a sophistication and true love of the music that jumped off of the page.

Most importantly, there was a dedication to the craft of journalism and, as a result, the music that Trouser Press wrote about and championed came to be bigger-than-life in the mind of this teenage rock fan years before I ever had the chance to procure such albums.

No other band was writing about the Suburbs (the band from Minneapolis), the Shoes (the band from Zion, IL), or doing in-depth interviews such as the album-by-album Sparks retrospective where the Mael brothers talked quite frankly about every album they’d released. For a kid like me who had just discovered the band via their 1982 album Angst in My Pants, I was stunned to discover that there were ten albums that had come before that would soon be finding their way into my record collection.

And so my love affair with Trouser Press began. Each new issue seemed to arrive at just the exact moment that I had finally digested every last word from the previous issue and the cycle would begin again. On days when I would enter the house with a new issue, my mom would just shake her head, knowing that there would be no seeing me for the rest of the night unless she chose to venture into the basement and knock on my bedroom door loud enough to penetrate the Killing Joke or the Ramones being blasted at top volume as I dove into the latest issue of TP.

For most of my high school days, my friends and I came to regard Trouser Press as the bible by which we would select which albums we would buy, if such albums could be found at local record stores. Many times we would go record shopping on a Saturday afternoon, copies of TP in-hand, and then commandeer the turntable at a party later that night, forcing the mainstream kids to listen to the latest Ultravox single.

As my high school days drew to an end, little did I know that the magazine was also down to its own final days. As I walked into the same drug store I’d been strolling into once a month for the last five years and picked up the April 1984 issue, I smiled at the sight of Joey Ramone and the words “Gabba Gabba Hey, Happy Birthday Trouser Press!” It would be the last time I’d ever have the honor of picking up a new issue, as the magazine would go out of business just as the issue hit the stands.

An article in Rolling Stone a few weeks later announced the magazine’s demise. If you had seen my friends and I on the day we found out, you’d have thought we were mourning the death of a beloved family member.

In truth, we were. Without even knowing it, Trouser Press publisher Ira Robbins (no relation) and his roster of superb writers had become an integral part of our youth. With a few simple words about a new album or band, Trouser Press could turn just another sleepy day in our small town into a no-holds-barred wild goose chase as my friends and I would become instantly hell-bent on getting our hands on the album in question.

To make an already long story as short as possible, we lovers of Trouser Press were forced to make due with occasional bylines from Robbins that would pop up from time to time in magazines like Musician and Rolling Stone, among others. Robbins also released a trilogy of absolutely essential Trouser Press record guides. I literally walked on air for a full week after finding a review of my first album in the second one.

And in the years that have passed since Trouser Press magazine was an active entity, I have had to stop more than one soon-to-be-ex-girlfriend from trying to toss out a stack of TP’s, then looking at me incredulously while I tried to explain their importance. These aren’t month-old Cosmo’s, baby. These are pages of rock history!

Sure, it has been 26 years since that last issue of Trouser Press hit the stands, but I am not alone in my continuing adoration and respect for a magazine that is legendary for covering “alternative music” long before it became a dirty word. Luckily, I was met with equal enthusiasm on the part of Ira Robbins when I approached him about doing some TP merchandising.