From Lon Chaney to Benicio del Toro, werewolves have been a Hollywood tradition for decades — something Jeff Johnson reminds us of with this week’s lycanthropic Revival House.

With Universal’s update of The Wolfman hitting theaters this Friday, I think it’s fitting to take a look back at the summer of 1981, when the werewolf picture made a glorious return to cinemas. 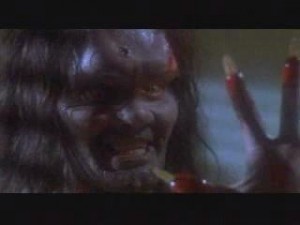 That year saw the release of no less than three wolf-themed movies in a span of five months: The Howling, An American Werewolf in London, and the underrated Wolfen, directed by Michael Wadleigh (yes, the same Michael Wadleigh who made Woodstock). Wolfen isn’t specifically about werewolves, though — its story focuses on an advanced form of shapeshifting based on a Native American legend.

The Howling and An American Werewolf in London, however, were definitely about werewolves, but it’s interesting to note how each film modified the myth slightly to suit the needs of its narrative. In The Howling it’s noted by an occult bookstore owner (Dick Miller) that the full-moon legend is “a lot of Hollywood baloney. Your classic werewolf can change shape anytime it wants, day or night, whenever it takes a notion to,” though silver bullets are still required to kill one. But in American Werewolf the transformation can only occur during a full moon; it’s also completely uncontrollable, yet silver bullets aren’t required for killing a werewolf.

Both films feature amazing transformation sequences, the likes of which had never been seen before, thanks to two legends of modern Hollywood makeup: Rick Baker and Rob Bottin. One of Baker’s first jobs was as an assistant to Dick Smith on The Exorcist (1973), before he moved on to such films as It’s Alive (1974), Brian De Palma’s The Fury (1978), and the 1976 remake of King Kong.

Baker was originally supposed to do the makeup effects for The Howling, but he left the production in order to do An American Werewolf in London (he received a “special makeup effects consultant” credit on the former). Rob Bottin filled in once Baker left, having already worked under him on several projects. The Howling turned out to be Bottin’s big break, and he certainly delivered the goods, creating stunning transformation scenes in a film that beat American Werewolf to theaters by four and a half months.

The Howling is directed by one of my favorite filmmakers, Joe Dante, who went on to direct Gremlins (1984), Explorers (1985), and Innerspace (1987). The clever screenplay, cowritten by John Sayles, contains many references for film buffs, including some of the characters being named after noted horror-film directors. Dante’s love for classic cartoons — he did after all also direct 2003’s Looney Tunes: Back in Action — is also prominent, as a “big bad wolf” cartoon plays on a TV during one of the werewolf attack scenes. Cinematographer John Hora’s work is showcased in this scene as well, in which we see a werewolf and its victim (Belinda Balaski) silhouetted in front of a set of window blinds.

Robert Picardo, best known as the holographic doctor on Star Trek: Voyager — and, like Dick Miller, a regular in Dante’s stock company — plays Eddie Quist, the serial killer who says, “I want to give you a piece of my mind,” and proceeds to pull a small chunk of his brain out of a bullet hole in his skull before turning into a werewolf. Nice!

An American Werewolf in London was written and directed by John Landis, who had risen to fame as the director of the blockbuster comedies National Lampoon’s Animal House (1978) and The Blues Brothers (1980). But this is no horror spoof, as one might assume. Sure, there’s humor in it — some very dark humor, in fact — but American Werewolf is a downright suspenseful, scary-ass monster movie. 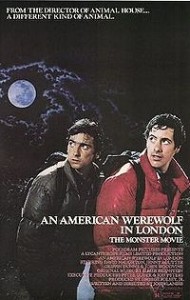 David Naughton and Griffin Dunne play college buddies backpacking across Europe, who one night find themselves lost in the English moors and hearing strange animal noises in the distance. The scene leading up to the film’s first werewolf attack is almost unbearably suspenseful, and mixed with great touches of humor as the two friends begin to make jokes about their predicament in a very believable way.

“It’s circling us … aw, fuck!” Jack (Dunne) observes, which is soon followed up with a comment from David (Naughton): “That’s right, a lovely stroll on the moors … tra-la-la-la-la … isn’t this fun?”

David survives the attack, but Jack dies. Well, sort of — throughout the film’s second act he visits David as a corpse, a little more decomposed with each appearance, insisting that his friend has become a werewolf and needs to take his own life before he harms others.

David begins to doubt his sanity as his nightmares get more and more intense. The dream sequences are some of the most frightening scenes in the film, since it becomes unclear exactly when the dreams are over and “reality” resumes. This is probably best illustrated by the sequence in which David watches his entire family get slaughtered by an army of strange piglike creatures armed with machine guns.

The look of the fully transformed wolf in both movies is quite impressive, yet very different from the other. It’s interesting to note that in An American Werewolf in London the wolf isn’t shown much — the camera catches only glimpses of it, and rarely do we see the entire creature in one shot. It seems to resemble more of a traditional wolf, walking around on all fours, whereas in The Howling the transformed creature is tall and bipedal, with a long snout. It looks more like a traditional werewolf — or at least how I’ve always imagined one to look.

In 1981 the Academy of Motion Picture Arts and Sciences created the Best Makeup category, and its very first Oscar was awarded to Rick Baker for his work on American Werewolf. There was one other nominee that year, but it wasn’t Rob Bottin — instead it was Stan Winston for the sci-fi comedy Heartbeeps, in which Andy Kaufman and Bernadette Peters play robots.

Nearly 30 years later, Baker’s in charge of the creature effects for the new Wolfman movie, directed by Joe Johnston (Jurassic Park III, October Sky, The Rocketeer). Like it says in the end credits of An American Werewolf in London, “Any resemblance to any persons living, dead or undead is coincidental.”