Is this the En Vogue lineup that recorded today’s track? We have no idea — and judging from the song, we’re guessing En Vogue has no idea either. 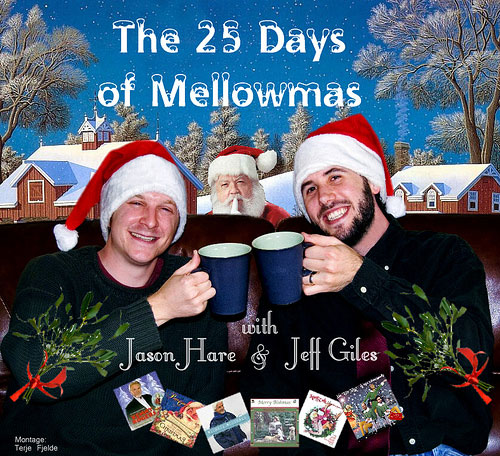 Welcome back to the fifth day of Mellowmas, where the two of us encounter the first of undoubtedly many holiday songs featuring our good friend Auto-Tune. Because what’s a holiday without Auto-Tune, really?

From The Gift of Christmas

Jason: Wait, this is En Vogue? What the fuck happened to, you know, EN VOGUE?

Jeff: This is the time on Sprockets when En Vogue dances.

Jeff: This is GOD AWFUL.

Jason: WHY DOES EN VOGUE NEED AUTO-TUNE? They’re supposed to be phenomenal vocalists. What the hell is going on?

Jeff: I love how the synth harp clears away the Auto-Tune.

Jason: Ha ha ha ha! Until the next solo line.

Jason: I seriously don’t think I’ve heard a solo line yet that doesn’t have Auto-Tune. Who the hell is dancing to this?

Jeff: And what’s with the instrumental break?

Jason: This is awful.

Jason: YES. They shouldn’t be resorting to this shit.

Jeff: This song is under three minutes long, and we’ve had maybe 15 seconds of real vocals. Which I’m relatively certain were recorded once and pasted into the later verses.

Jason: “The album was released on October 8, 2002 by Discretion Enterprises.” As in “We didn’t use any.”

Jeff: Speaking as someone who never really cared about En Vogue, I’m kind of pissed.

Jason: See, I liked En Vogue. I’ve said before that their cover of “Giving Him Something He Can Feel” is awesome.

Jeff: I wonder if that cover shot actually happened. LIke, if someone held them prisoner in a snow globe. And the only way he’d let them out is if they recorded this terrible album.

Jason: I’m pretty sure that by 2002, En Vogue had very little choice over any career move.

Jason: That’s what I’m looking up now. I don’t think so.

Jeff: I assumed they were like a younger version of the Spinners at that point. “Hey, everyone! Thanks for coming out tonight! We’re going to perform some hits that none of us were involved in recording!”

Jason: By 2002, two original members had left. One new member joined, making them a trio, but she left after this album. I WONDER WHY.

Jeff: Were there four to begin with? I never bothered to check. I guess I assumed they were a trio. See?

Jason: Apparently they were.

Jeff: I’m the perfect audience for this kind of crap.

Jason: This is the kind of shit I complain about all the time with Mariah Carey. Stop removing the thing that makes you unique in order to pander to an audience.

Jeff: Which audience is this, exactly? I would be very surprised if this song had an audience.

Jason: There’s three versions of “Jingle Bells” on the album.

Jeff: I would not be surprised to learn that this ended up on the album without their knowledge.

Jason: The “Euro Mix,” which is what we’ve just listened to, the “Rock Version” and the “Instrumental Version.”

Jeff: Dammit, I was hoping there’d be a mix for every continent. “Australian Mix.” “Antarctic Mix.”

Jason: Ha ha ha ha! Okay, I just listened to a bit of the “Rock Version,” and from what I can tell, there is no Auto-Tune.

Jeff: This totally happened without En Vogue’s knowledge. I know it.

Jason: So the Auto-Tune was done specifically to pander to a certain crowd.

Jeff: So do you think this song has ever been played anywhere in public? I’m guessing no. No radio play, in Euro or anywhere else.

Jason: Great. And now we’ve subjected our readers to it.

Jeff: I would further venture to guess that if you asked any of the members of En Vogue, past or present, about the Euro Mix of “Jingle Bells,” they wouldn’t know what you were talking about.

Jason: Part of the “Lost Weekend” era of En Vogue.

Jeff: I think the members of En Vogue probably spend more time listening to Jeffrey Osborne’s Christmas album than this.

Jason: I get the feeling most artists don’t spend much time listening to their own holiday albums, because they know that they all were just trying to make a quick buck.

Jeff: What is En Vogue doing now? Did they ever pop up on the Salt ‘N’ Pepa reality show? Like, providing background vocals for their arguments?

Jason: “All evidence points to a well orchestrated & meticulously planned comeback putting to rest speculation that it might not happen.”

Jason: I don’t know from Ciara. I know Janet Jackson is kryptonite.

Jeff: And it was all gross and sexy?

Jeff: She could complete her transition from Janet to Millie.

Jason: ….and there goes lunch. Now I, too, have something warm for Christmas. Thank you.

Jeff: I would like it to include the song “Give Me Something Warm for Christmas.”

Jason: “A Christmas Cleveland Steamer by Millie and Janet Jackson.”