Itâ€™s a magnificent day, as we move on to the most monstrous letter weâ€™ve had in a while: M. After a few quick letters in a row, M will take seven weeks to get through, so get settled in. Ready? Good. Itâ€™s time to dig into more Bottom Feeders — songs that charted no higher than #41 on the Billboard Hot 100 chart in the 1980s.

I listened to this song as I was writing the intro, and even though that paragraph is only four lines long, I got through â€œDancinâ€™ Like Loversâ€ three times. Maybe this is what I need to do for every song I donâ€™t like — listen to it over and over and over again — because the more I listened, the more I enjoyed it.

“Dancin'” was MacGregorâ€™s sixth Hot 100 hit, but her only big hit was also about lovers: â€œTorn Between Two Lovers,â€ which went all the way to the top as her first single back in 1976.

Madness was just monstrous in the UK, even before the U.S. got them with their breakout hit â€œOur House.â€ â€œThe Sun and the Rainâ€ was the 17th song out of their first 20 to all go Top 20 in England. The States’ first taste was with the release of the Madness album compiling some recently released material with older hits. â€œIt Must Be Loveâ€ went to #33 and â€œOur Houseâ€ to #7 in â€™83. â€œThe Sun and the Rainâ€ was their only other Hot 100 hit in the U.S.

“Hello, may I speak to Mr. Don Key-Chot, please?” “No, Senior!” Although thereâ€™s not much to it, this is really a fabulously catchy number by this French synth-pop group. Their follow-up, â€œPancho Villa,â€ failed to chart.

With no background at all, I would have just assumed Mai Tai was just another failed American R&B group. But no, they are a Dutch group formed by two male producers who grabbed three background vocalists and tried to make them stars. This however, was their only hit.

Melissa Manchester is another artist that I mistakenly plug into my head as a queen of adult contemporary ballads. Sheâ€™s definitely an adult contemporary artist but of her seven Hot 100 hits in the decade, five of them are upbeat pop songs. As such, I never really go back to listen to her, but Iâ€™m happy to visit five of her tracks here. â€œNice Girlsâ€ is a great tune off her first Greatest Hits record in 1983. â€œMathematicsâ€ is probably her most underrated song though, a catchy little pop number from her album of the same name. â€œThief of Heartsâ€ is the only one I donâ€™t care for, from the soundtrack to that movie, itâ€™s just a little too â€œFameâ€-ish for me. â€œLovers After Allâ€ is a duet with Bottom Feeders favorite Peabo Bryson. 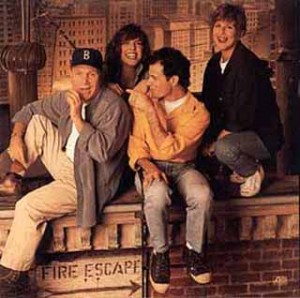 Well, if youâ€™ve read this series for a while now, you automatically know that I donâ€™t like Manhattan Transfer. I can deal with them when they had a few R&B numbers around 1983, like â€œSpice of Lifeâ€ which is actually a very good song. â€œRoute 66â€ actually won a Grammy for best Jazz Performance by a duo or group in 1982. None of them deserved a spot on the Hot 100 though, especially the goofy â€œTrickle Trickle,â€ which ranks at #18 on my Bottom 80 Songs of the â€˜80s list. Maybe I just donâ€™t get it. “Trickle Trickle” sounds like a problem Biz Markie would say you have after catchin’ the vapors.

The Manhattans had a huge R&B career with charting singles from 1965 to 1990. Singer Gerald Alston helped the Manhattans cross over onto the Hot 100 three times in the decade with â€œShining Starâ€ going to #5 in 1980. â€œCrazyâ€ was their next best song of the â€˜80s after that.

To each his own I guess, but hereâ€™s another artist that I just donâ€™t understand the popularity of, especially enough to get him hits straight through the decade. I suppose I can deal with â€œHey Mambo,â€ his collaboration with Kid Creole & the Coconuts, but you have two evils here with â€œLonely Togetherâ€ and â€œIâ€™m Your Man.â€ I think the reason you have to give the nod to â€œIâ€™m Your Manâ€ as the worst track here is because at least â€œLonely Togetherâ€ was his style. The club banger for Barry is just pathetic, to the tune of the #20 position on my Bottom 80 Songs of the â€˜80s list.

Teena Marie was the awesome protegÃ©e of the late Rick James. Beginning with 1980â€™s Irons in the Fire, â€œLady Tâ€ wrote all her own material. As you can see here she could write some great funk tunes, like â€œSquare Bizâ€ and smooth ballads like the excellent, â€œOoh La La La.â€ Her songs have been sampled a ton of times, probably none as big as â€œOoh La La Laâ€ being reworked for the Fugeesâ€™ â€œFu-Gee-Laâ€ in 1996. Unfortunately, her new music has been hit-or-miss. She had a nice little comeback in 2004 with La DoÃ±a, but 2006’s Sapphire was trying a bit too hard to be gangsta. She just released an album last week called Congo Square, which is mostly ballads and collaborations with people like Faith Evans, George Duke, and Howard Hewitt. You’re a funk goddess, Teena — let’s not abandon what got you here in the first place.

Next week we get another Rick James protegÃ©, a rare roller-skating anthem, and a guy who I was once told I looked like.